“…these men who were responsible for spreading the bad report about the land were struck down and died of a plague before the LORD. 38 Of the men who went to explore the land, only Joshua son of Nun and Caleb son of Jephunneh survived.”

Yesterday we learned about the minority report given by Caleb and Joshua. Today, we learn the rest of the story.

Ten of the twelve spies sent by Moses into the promised land returned in fear and gave a negative report of sure defeat. In spite of the fact that God had promised to safely deliver them into the land, these ten spoke out of hopelessness and unbelief. They let their own perception of “reality” overwhelm God’s reality for them.

These ten men looked at their situation and circumstances, and became fearful and defeated, instead of keeping their eyes on God and His promised victory. In spite of how many times they had already seen God move on their behalf in their journey from Egypt, they thought this was too big a job for God.

Isn’t it silly to even think there could be anything too hard for God? See Jeremiah 32:27. These men should have taken their eyes off the problem and focused instead on God. But because they didn’t, and they believed the negative report they heard themselves confess from their own mouths, these ten men were struck down and died of a plague.

“The tongue has the power of life and death, and those who love it will eat its fruit.” (Proverbs 18:21)

Tell the Father you want to see things from His perspective. Ask the Holy Spirit to teach you how to increase your faith by proclaiming God’s Word and promises over every situation. 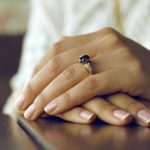 A Snake on a PoleDaily Devotional