A Jealous and Avenging God

The people of Nineveh urgently called out to God and repented after Jonah warned them of impending judgment (see devotional for December 20).

Unfortunately for them, within a relatively short time they returned to their old ways of idolatry and rampant sinfulness. In our passage today, God is speaking to them through another prophet, Nahum, one hundred years later. This time they did not repent and were utterly destroyed.

Nineveh was the capital of Assyria, and the Assyrian empire had only grown more wicked since the time of their earlier reprieve from God. They were known as the most brutal and violent conquerors of their day, and some historians say, there has never been an empire since then that surpassed their cruelty. They were the conquerors of the northern kingdom of Israel.

There is One God and He allows no room for idols. The Assyrians viewed Jehovah as just another of the many gods they worshipped. Surely the Lord is slow to anger, and merciful, but eventually His justice must be exercised. God is safety for those who take refuge in Him but danger to those who disregard Him. And because the Assyrians disregard Him they cannot be safe.1

God does not change. Pray for our nation and this world to repent and turn to the One True God.

Pray to the Father for a spirit of repentance to reign on this earth.

Walk Humbly with your GodDaily Devotional 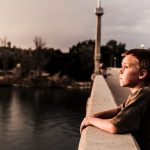