9 Years in Prison Prepared Larry for…

Growing up in a rough time in history, Larry gave up on life and eventually found himself living on the streets which led him to a life of crime that put him in prison. While in prison, Larry met Don Castleberry from Freedom in Jesus Prison Ministries who prophesied over Larry that one day he would be a pastor.

While serving 9 years in the Montford Unit Larry became a faithful disciple of Christ and eventually was released to become… a pastor in a local church! 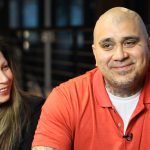